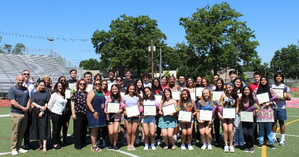 Congratulations to the 32 FLHS students who received their Seal of Biliteracy!

The Seal of Biliteracy is an award given by the district in recognition of students who have studied and attained proficiency in two or more languages – one of which is English - by high school graduation. The students attained the seal in the following languages: Spanish, French, Chinese, Russian, Korean, Hebrew, Polish, Urdu and Ukrainian.

Mrs. Liliana Lopez, Supervisor of World Language, Music and ELL, presented each student with a framed certificate and bouquet of flowers.

“Multilingualism in Fair Lawn is promoted, valued and celebrated! In today’s interconnected world, knowing more than one language is necessary and these students leave high school recognized as having this asset.  We are so proud of our community’s diversity and these students are representative of our multilingual community,” said Mrs. Lopez.