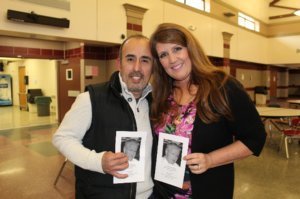 FLHS (April 29, 2022) - Fair Lawn Public Schools recognized the service of Ron Newsum, former technology education/woodshop teacher, by naming the FLHS woodshop in his honor on April 28. A brief dedication ceremony was held in the FLHS courtyard and a plaque inscribed with The Ron Newsum WoodShop was hung near the entrance to Classroom B126. The beloved teacher retired in 2010 after teaching for 45 years and passed away in 2017.

Mayor Kurt Peluso presented Ron’s family with a proclamation that said: “Named in loving memory of Ronald L. Newsum, a devoted husband, father, grandfather and teacher, an Army veteran, he proudly served his country as a Green Beret.”

Renaming the woodshop after Ron was a joint effort by the town and Fair Lawn Schools.

Ron’s daughter, Susan Hurtado, told attendees, “The Newsum family would like to officially thank all those involved for organizing such a thoughtful honoring in Ronald Newsum's name. Being able to put this into motion during a pandemic is greatly appreciated. He loved his job and the extra jobs he took on as well. His wife, Jane, would always joke to him and say ‘LIVE OR DIE, FAIR LAWN HIGH’ as he headed out the door for a FLHS related job or gathering; both of which he loved equally.” Ron’s wife sadly passed in 2020, and family members say she would have been pleased to attend the
ceremony.

Former FLHS Principal Jim Marcella, who worked with Ron for many years, said he was a “very special man.”

“When I think of Ron I think of a man who cared deeply about all the students of FLHS.  He taught woodshop and helped his students to create exquisite work in wood.  As wonderful as he was at teaching, he was an even more wonderful human being.  One of the most honorable, kind, and caring people I have had the pleasure to know. A shining example for anyone who works with young adults,” said Jim Marcella.

“We receive so many requests to rename a classroom and we rarely grant them. This request was different. This mean so much to the school and it’s a decision we didn’t take lightly to rename our woodshop after Mr. Newsum. Even though I never had the honor to work with him, after hearing all the stories tonight and throughout the years, I feel like I know him.”